I’m sure you’re already aware of the O1 tool steel. Many knife-makers are using O1 tool steel for making knives and blades. Making a knife from O1 tool steel will be a perfect choice as it provides strength and hardness to a knife.

It usually produces a strong edge and can be sharpened. O1 steel knife is water-resistant, and if you are reading this blog post right now, you’ll get more information.

What is O1 steel?

It is a low-end oil hardening tool made of steel and belongs to Steel’s O Category (O1, O2, O6, and O7). It is ubiquitous steel used by custom manufacturers and mass makers. The O1 tool steel is used for making cutting instruments such as blades. You can also use O1 tool steel for knife making and other related items.

It’s one of the most flexible tools for making knife blades. It is known as low alloy steel because O1 steel contains eight chemicals.

The O1 tool is considered low-end with high carbon and manganese, making it ideal for durability and wear resistance. Concerning listed chemicals, O1 Steel complies with SAE J437 and J438, ASTM A681, and DIN 1.2510.

Approximately 30 min/per 25 mm of the ruling segment is to be supplied, and the steels will be immediately extinguished in oil. Tampering is always required after hardening.

O1 tool steel heat treating for knife and other cutting instruments is simple. In short, please bring it to a high temperature, quench it in vegetable oil, and then temper it in a toaster oven or a normal kitchen oven for one hour at 400°. The path to success is to heat the metal evenly. Creating an enclosure with anything like a fire brick will help you do that.

Slowly heat the steel using a simple MAPP gas torch. Heat down a little slower than you expect. If one side is hotter than the other, it’s likely to warp if you quench it in oil. So heat up slowly.

There are a few ways of determining when the temperature is critical. Avoid relying on color because the ambient light can affect the color you see.

The easiest way to verify whether you have reached a critical temperature is to use a magnet because O1 tool steel loses its magnetism at this temperature.

The rare earth magnet sticks to the end of the maple stick shown above. This is a simple method to check the safety of steel when it hits temperatures quickly. Only remove the steel from the flame frequently and test it with a magnet.

If the temperature reaches a critical level, quench the steel in oil by spraying the blade directly vertically, not tilting to one side or the other. Now, move immediately to your oven to temper for one hour at 400˚.

The answer to this question is Yes, O1 tool steel is good for knives. O1 is popular forging steel that can be used to make knives because you can efficiently work it. It is also easy to form fast. O1 tool steel provides an extreme edge that isn’t going to dull as easily.

O1 steel has decent edge retention, high wear resistance, hardness, and good hardness, but it’s not very good for corrosion resistance. O1 steel can be rusty, and care must be taken to prevent rust.

So, if you’re planning to own an O1 steel knife, I suggest that you take care of it after any wet use (Drying and oiling the knife is a must).

Because of the many features of O1 steel, some high-end mass-produced knives are made of O1 steel. O1 steel is most commonly used by Randall Knife, Crazy Dog Knife, and many other custom knife makers.

Buying an O1 tool steel knife would be a great choice. O1 tool is great steel with many features. O1 tool steel will be a perfect choice as it provides strength and hardness to a knife.

Lots of makers use O1 tool steel for making knives, and in my opinion, O1 is probably the best you can use to make a knife.

The difference between 5160 and O1 tool steel is so slight that you won’t tell which is better just by regular usage. 5160 steel is more shock resistant while01 holds a much better edge.

5160 steel is mainly used in swords and large knives, while O1 is used to make small knives and blades.

In conclusion, O1 tool steel would be the right choice for making knives and blades as it provides strength and hardness to a knife or blade. O1 steel has many other features like it is water-resistant, and produces a strong edge.

Its toughness slows down the machining process, and it makes it perfect for beginners because it takes longer to make mistakes.

O1 is one of the most costly carbon steels, and another drawback to O1 steel is that it has low corrosion resistance, so you have to take care of your knife after using it to keep it in shape.

Despite its expensiveness, this is a perfect choice, and I recommend O1 steel to you. If you are a hunter, diver, or kitchen knife user, I do not recommend O1 tool steel. It’s better to go for a high corrosion resistance steel tool in this case.

What is 01 tool steel?
O1 tool steel is a low-end oil hardening tool, non-deforming tool steel. O1 tool steel is widely used in applications where alloy spills cannot provide sufficient hardness, strength, and wear resistance. The O1 tool steel is mainly used for making cutting instruments such as blades and knives.
Which category of steel does O1 belongs to?
O1 steel belongs to Steel’s O Category (O1, O2, O6, and O7). It is a very common steel used by custom manufacturers and mass makers. O1 steel is a very common hardening steel.
Which chemicals does O1 tool steel consist of?
O1 steel is made of eight chemicals. These chemicals include Manganese, Carbon, Chromium, Tungsten, Nickel, Sulfur, Phosphorus, and Silicon. These all provide sharpness and toughness to the steel.
At which temperature does O1 steel heated?
O1 steels can be heated evenly to 780-820°C (1436-1508°F) until they are thoroughly heated. O1 steel can be preheated to a temperature of 300-500°C (572-932°F) if necessary.
Is O1 Steel Stainless?
O1 steel is not stainless steel. The minimum chromium requirement for stainless steel is 12%, but in O1 tools, steel chromium is present in only 0.6%. O1 steel is tool steel, and it is not stainless steel.
Is O1 tool steel good for knives?
Yes, O1 tool steel is good for knives. O1 is a popular forging steel that can be used to make knives because you can efficiently work it, and also, it is easy to form fast. O1 tool steel provides an extreme edge that isn’t going to dull as easily.
5
Share Tweet Pin Share 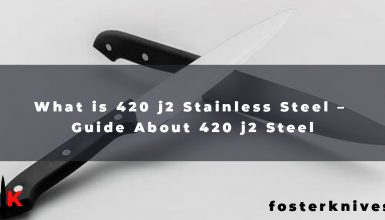