Honing and sharpening are the two techniques that most people believe are used to sharpen knives. Sharpening definitely does sharpen the knives. But what does honing a knife do then? Honing basically does not sharpen the knife. It brings the sharp edge of a knife back to its position, which was displaced because you’ve been using the knife.

Now, when the sharper edge is moved back to its position, knives cut sharp again and this is the reason many people believe that honing does a bit similar job to sharpening. Honing a knife makes it feel sharper because the blade gets back to its proper position and cuts sharp.

If you’re thinking “Can a dull knife be sharpened by honing?” Here’s the answer. Honing only makes the edge of the knife’s blade move back to the center, rather than actually sharpening the knife. You can hone your knife before every use, to make sure your knife works fine and prevent it from getting too much dull. But, you cannot simply hone a dull knife to sharpen it. For the sharpening of knives, you would need the actual knife sharpeners.

Honing vs Sharpening – What’s the Difference?

For many people, or especially the ones who do not have to deal with cutting and chopping as a professional, honing and sharpening might not seem much different. But there actually exists a huge difference.

What Does Honing a Knife Do?

Honing – Honing a knife means restoring its bent edge. It does not really sharpen the knife nor can it overcome the importance of sharpening a knife. Honing steel or honing rod straightens the edge of the knife and brings it back to its position, without removing much of the material from the blade. But, honing does make a knife feel sharper. That’s because the knives become temporarily dull because of the displaced edge. And the right positioning of the edge (by honing them) makes them work great again. Hence, honing does make the cutting of your knife better again but does not sharpen it.

What Does Sharpening a Knife Do?

Sharpening – Sharpening is actually what sharpens the knives. Sharpening a knife means shaving off a thin layer of the blade material that has become dull over time, by rubbing it over a surface (a knife sharpener). This exposes an entirely new layer of a sharper edge and makes your knife work as sharp as a new knife. Different tools can be used for sharpening knives such as Whetstones, Manual sharpeners, and Electric sharpeners.

Do you hone or sharpen first?

Sharpen first. Sharpening a knife gives your knife an entirely new and sharp edge. After frequent use, the edge might bend, displace or misalign. When this happens, honing works. Regular honing would return the edge to its optimal position. Hence, you should sharpen your knife first, and then hone it regularly.

Major Difference Between Honing and Sharpening

According to our research, we have come across 2 major differences between honing and sharpening.

Does a Honing Rod Sharpen?

No. The honing rods do not sharpen the knives. They only return the edge to its original position and straighten the blade.
To read further about the sharpening and honing of knives, you may visit Here.

Whetstones are a great tool and definitely the best way to sharpen kitchen knives. Other than whetstones which you may also call the Sharpening stones, there are manual and electrical knife sharpeners as well. Although they are more convenient to use, they are mostly recommended for professional uses. For kitchen knives, whetstones are the best tool for sharpening.

Here’s how you can use a whetstone to sharpen your kitchen knives.

Make sure the blade angle is properly edged. Most kitchen knives have an angle of 15 to 20 degrees. Angles on pocketknives can exceed 25 degrees. It’s important to have the knife blade angled diagonally across the whetstone when starting.

What Happens If You Don’t Sharpen or Hone Your Knives?

When you don’t take care of your knives, they would simply get dull and useless over time. Sharpening the knives isn’t required much often but still is an important thing to keep your knives sharp. While honing is often required. Many people prefer honing their knives before every use.

Honing and sharpening keep the knives alive and sharp. When you don’t sharpen or hone them, they would gradually lose their edge and become dull. Even a slightly dull knife could affect its working to a great extent. After constant use and no sharpening at all, knives could even break due to extreme dullness. Hence, sharpening and honing your knives is an essential and highly recommended thing.

How to Know When Your Knife is Dull?

The blade would feel dull and cutting or chopping won’t be comfortable. When a knife is dull, it would slide or slip over your ingredient and you’d feel like doing it with more pressure for a full refined cut.

One simplest way to determine if your knife is dull is the Fingernail Sharpness Test. The technique is pretty simple though. You simply have to tap the edge of the knife blade over your fingernail gently. If it bites in, that would mean your knife is sharp. If it slides or slips, your knife is dull.

Honing and Sharpening are two different techniques, both used to make the knives work better. Sharpening is less required as it keeps the knife sharper for a long time. While honing is often required. Moreover, excessive sharpening of knives may affect their lifetime while honing doesn’t do that. It simply adjusts the blade edge back to its optimal position. 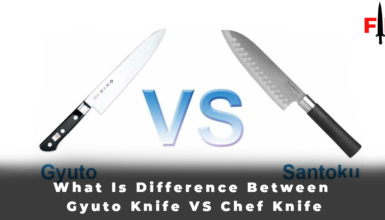