A dull knife can make cutting less efficient. Using a dull knife can also be more dangerous because consumers need to apply additional force when cutting, which can lead to slipping and injury. Moreover, poorly cut food will not cook properly.

If your knife is dull, you don’t have to worry about it. There’re a variety of tools that can be used to sharpen knives at home. Some of the knife sharpening tools are honing rod, sharpening stone, electric knife sharpener, and many more.

There are different ways of sharpening a knife, and some knives need totally different methods for sharpening. This guide will tell you the sharpening methods of different knives and how you can sharpen your knives with the help of sharpening tools.

How to sharpen a Kitchen knife at home? 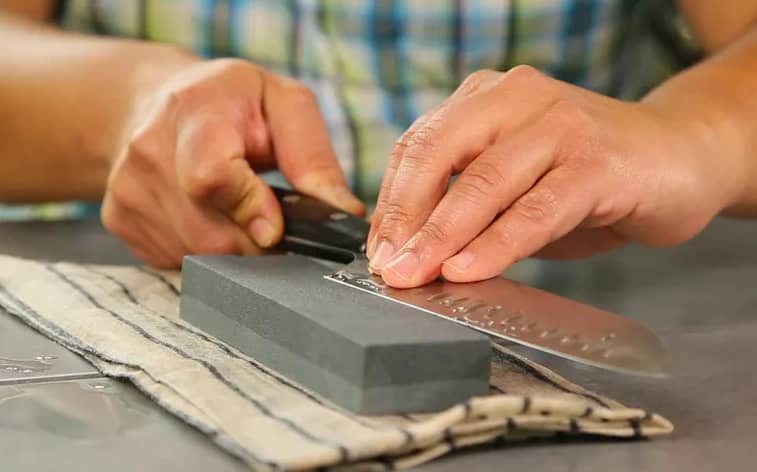 Use the following steps to sharpen your kitchen knife with a whetstone:

How to sharpen a Shun knife?

How to use the Wusthof electric knife sharpener?

How to sharpen a Serrated Steak knife?

Sharpening a serrated steak knife is slightly different from sharpening a straight-edge knife, but it’s not as complicated as you think.
Serrated knives maintain their edge longer than straight-edge knives. Though they are long-lasting, a day comes when you have to sharpen your steak knives because a dull steak knife can.no longer slices clearly through your food. 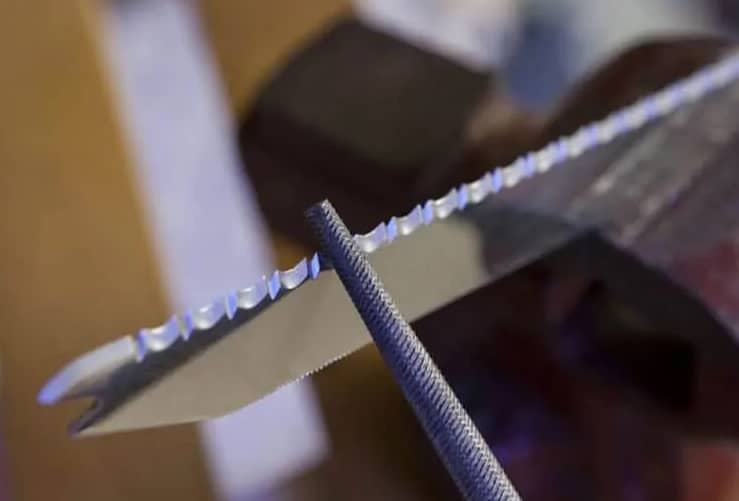 This method takes some time, but it will also give you the best results.

How to sharpen a Serrated Bread knife?

Bread knives with serrated blades cut well for a long time. However, like other knives, they become dull and may lose the cutting ability. It doesn’t matter what you have heard; these knives can be sharpened.  With the right tool and a little patience, you can easily sharpen any serrated bread knife.

While sharpening a serrated bread knife, each serration must be handled individually. Serrations come in many sizes; the first thing you have to do is find a sharpener that matches the serration sizes as closely as possible.

How to sharpen electric knife blades with a sharpening rod? 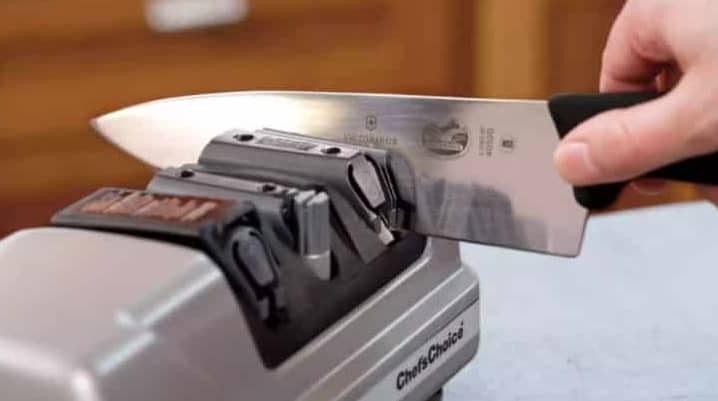 Sharpening an electric knife with a sharpening rod is quite easy; you just have to follow the following steps:

How to sharpen a Fillet knife?

Sharpening a fillet knife is important to maintain its sharpness and excellent performance. There are different ways to sharpen a fillet knife using various sharpening tools. Some of the ways include:

These methods are already discussed in the article. Consider that if you want to know the steps involved in the sharpening process.

How to sharpen a Wood Carving knife?

If you have done some carving with a knife, your knife’s blade may become dull after some use. A dull knife can be risky, so it is recommended to sharpen your carving knife if you see your knife in a dull condition.

How to sharpen a Hoof knife?

Hoof knives can only be used when they are fully sharpened. A hoof knife will not work perfectly; if it is half-sharp and you need more effort to push a knife. Moreover, there’s nothing more dangerous than a dull hoof knife.

If you want to sharpen the hoof knife, please draft the blade multiple times on the inner side (cutting edge) along the sharpening steel’s overall length. The cutting edge should be conducted at an angle of 15-degree to 20-degree along with your diamond-coated sharpening steel. Slide the blade down the steel at a constant angle until the tip of the knife runs off the other edge. Repeat this process several times, depending on the dullness of the blade.

How to sharpen a Japanese knife?

Japanese knives are essential tools for a chef. It is most important to keep the knife sharp. There are various ways to sharpen a Japanese knife. Some of the ways include: 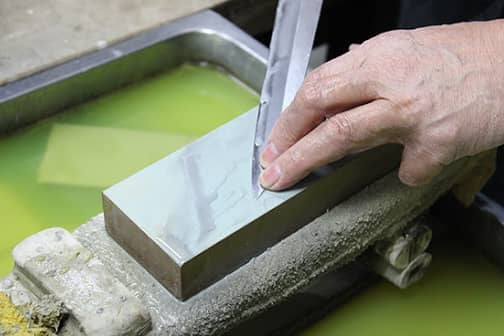 Read This: How to Clean Knife

How to sharpen an Exacto knife?

Exacto knives have a replaceable blade that you can change when the gets dull. Moreover, sharpening an Exacto knife’s blade is quite easy; you just need a tool to sharpen it. You can sharpen your Exacto knife with sandpaper or a sharpening stone.

Let’s take a look at both methods:

Sharpen knife with a Sharpening stone

They are both good options, but you can opt for the one that suits you best.

How to sharpen a Tanto blade? 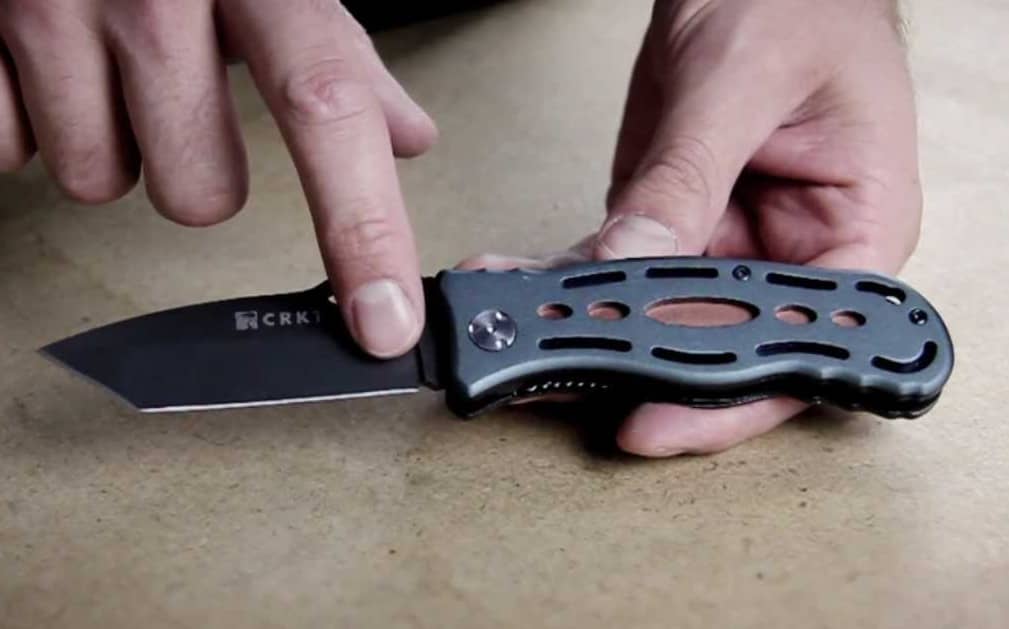 Some of the sharpening techniques include:

You can also sharpen your Tanto blade with a guided sharpener. As you know, Tanto blades are double-beveled, which means that their edge forms a v shape resulting in making sharpening a bit more tricky. Double bevel blades have to be sharpened on both sides at the same angle.

How long does it take to sharpen a knife?

A knife can easily be sharpened in a few minutes if the knife is not in bad condition. If someone is trying to sharpen the same knife for the very first time, it may take weeks to get it right. On average, it takes five to ten minutes for an experienced person to sharpen a knife.

On the other hand, it takes about fifteen minutes to sharpen from start to finish for a professional kitchen knife. There are several factors that determine how long it will take to sharpen a knife. Some factors include:

There’re a variety of tools that can be used to sharpen knives at home. Some of the knife sharpening tools are honing rod, sharpening stone, electric knife sharpener, and many more. Most of the knives, such as the Paring knife, Butcher Knife, Buck Knife, Santoku knife, and many others, can be sharpened using these tools. Some knives need different techniques to sharpen; for those techniques, read the article in detail. I have discussed those techniques in detail in the article.

I hope you’ve gone through the article and now you’ve known the sharpening techniques of different knives. If you’ve any other queries related to this article, you will be most welcome to leave your comment below. I’ll try my best to provide a solution to your problem as soon as possible.

What are some of the professional knife sharpening services?
Properly sharpened and well-maintained knives can help you in cooking more effectively and solve many of your problems. If your knife is dull, you don’t have to worry about this. There’re a variety of knife sharpening services that offers in-store or remote services. Some of the best knife sharpening services are National Sharpening Co., Korin, Carisolo Grinding Sur LaTable, Togu Knives, and many more.
Can you sharpen a Ceramic knife?
While ceramic knives stay sharp for a long time, but there’s no such thing that never needs sharpening. Ceramic knives also need sharpening after some time, and you can sharpen a ceramic knife by yourself at home. The ceramic knife can only be sharpened against something that is harder than it is.
What are the best knife sharpeners on the market?
A knife sharpener is a tool through which you can sharpen your knife. A knife sharpener can be electrical or manual. Some of the best knife sharpeners available in the market are Chef’s Choice Trizor XV, Edge Pro Apex 4, Chef’s Choice ProntoPro 4643, and many more.
What is the sharpest Pocket knife in the world?
“Kershaw Blur Black 1670BLK Everyday Carry Pocket Knife” is the sharpest pocket knife in the world. Some other sharped knives are Gerber EAB 31-00345 Lite Pocket Knife, Spring Assisted Pocket Folding, Farberware knife sharpener, Smith & Wesson SWMP4LS S.S. Assisted Folding knife, and many more.
What angle is best for sharpening a knife?
All the knives need sharpening, and It is recommended to sharpen your knives at a 15-degree to 20-degree angle. This angle will give you the best results when preparing food. Moreover, you can sharpen your knife with a honing steel, whetstone, or any other sharpener.
13
Share Tweet Pin Share 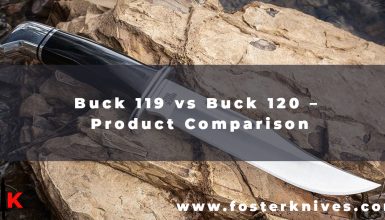 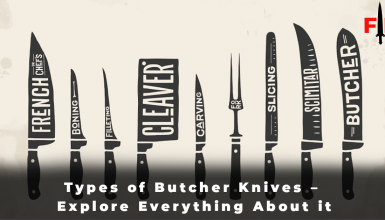