People in California who wish to carry a knife may face some restrictions, classifications, numerous local ordinances, and rules on the state level. In California, Knife laws are not that friendly.

Different kinds of knives are illegal to carry, conceal, or even own. On the other hand, carrying knives openly or concealed is legal if various legislative provisions are followed.

California is one of the states that allows knife-carrying in public or private colleges and universities, but the knife length limit should not exceed from 2.5-inch. And the knife should be legally carried openly in a sheath at the owner’s belt.

Sometimes California laws may be ambiguous and contradictory. Knives laws have been changed many times.

This article may help you in clearing all your doubts regarding the knife laws in California. We’ve divided knife laws into three sections on behalf of its legality.

Law for the Switchblades

In California, knife switchblades having blades more than 2-inch are illegal for carrying openly, selling, or transferring.

Any person who does any of the following with a switchblade knife having a blade longer than 2-inch in length is guilty of a misdemeanor:

Penalties for breaking the rules

When you violate the laws for switchblade knives, you have to go through the following penalties:

Knives that can be carried openly but not concealed

Some knives can be legally carried openly in California but cannot be concealed; that would be illegal. Some knives include:

Penalties for breaking the law of Concealed carry

As you have known, some knives that are illegal when you conceal them. When you violate the laws for the concealed carry, you have to go through the following penalties:

Knives that are totally legal

In California, some knives can be carried either openly or concealed. These knives are considered totally legal. Some knives include:

There are no specific length limits of the knife’s blades. However, switchblade knives’ length should not be more than 2.5-inch. Except that you can carry any blade size of the knife if it is legal.

In California, many knives are completely illegal. Code 16590 states commonly prohibited weapons as well as knives. In this section, you will find out some of the prohibited knives, tools, or weapons.

Carrying one of these knives on your purse is legally interpreted as showing criminal intent, which is punishable by law.

To make the above information more clear, here’s a list of knives or weapons that are illegal, banned, or prohibited:

Restricted Places to carry a knife

There are some places in which you can’t carry a knife with you. Some popular places include:

There are some restrictions on carrying knives in schools or universities. However, you can take a knife less than 2-inch in school or university.

“Any person who brings or possesses any ice pick, dirk, dagger, or knife having a fixed blade longer than 2-inch within the school or university building or ground is guilty of a public offense, punishable by imprisonment in a country jail not exceeding 1-year.”

It is written in California penal code 626.10 that you can’t bring or possess any box cutters, dirks, ice picks, or other dangerous knives in school, kindergarten, college, or university premises.

2.   In public or state buildings

“Any person who brings or possesses knives within the state or public building is guilty of a public offense, punishable by imprisonment in a country jail note for not more than 1-year.”

Carrying knives openly or concealed is legal if various legislative provisions are observed. California knife laws are a bit confusing. It is recommended to learn the legal definitions of prohibited knives.

Switchblades are legal if they’re less than 2-inch. Knife’s switchblades having blades more than 2-inch are illegal for carrying openly, selling, or transferring.

You can carry some knives openly, but if you conceal such knives, you may be charged. Moreover, some knives are totally legal and can be carried either openly or concealed.

If you are not aware of knives that are illegal to conceal or carry, then you can defend yourself if you are charged. You have to prove that you were carrying those knives without any wrong motive.

Are undetectable knives legal?
Undetectable knives cannot be detected by a metal detector or magnetometer. Carrying, selling, manufacturing, or importing such knives are illegal. You will be fined up to $1000 and imprisoned in a country jail for not more than 1-year.
Are Karambits illegal in California?
No, Karambits are not illegal. They are legal if they do not have an edge on both sides of the blade. If they have an edge on a single side, they are legal, and you can easily carry it with you.
Are double-edged knives illegal in California?
Double-edged knives are legal in California. There’s no law that prohibits the sale, purchase, manufacturing, or open carry of double-edge knives. However, it is illegal to carry such knives concealed.
What kinds of knives are legal to carry in California?
Some kinds of knives are legal to carry in California. Such kinds of knives include Folding knives or Fixed blade knives such as dirks or daggers. Moreover, switchblades with blades less than 2-inch are also legal.
26
Share Tweet Pin Share 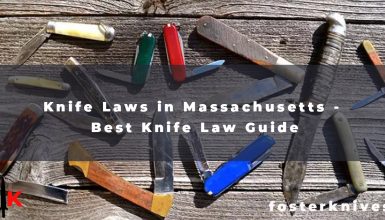